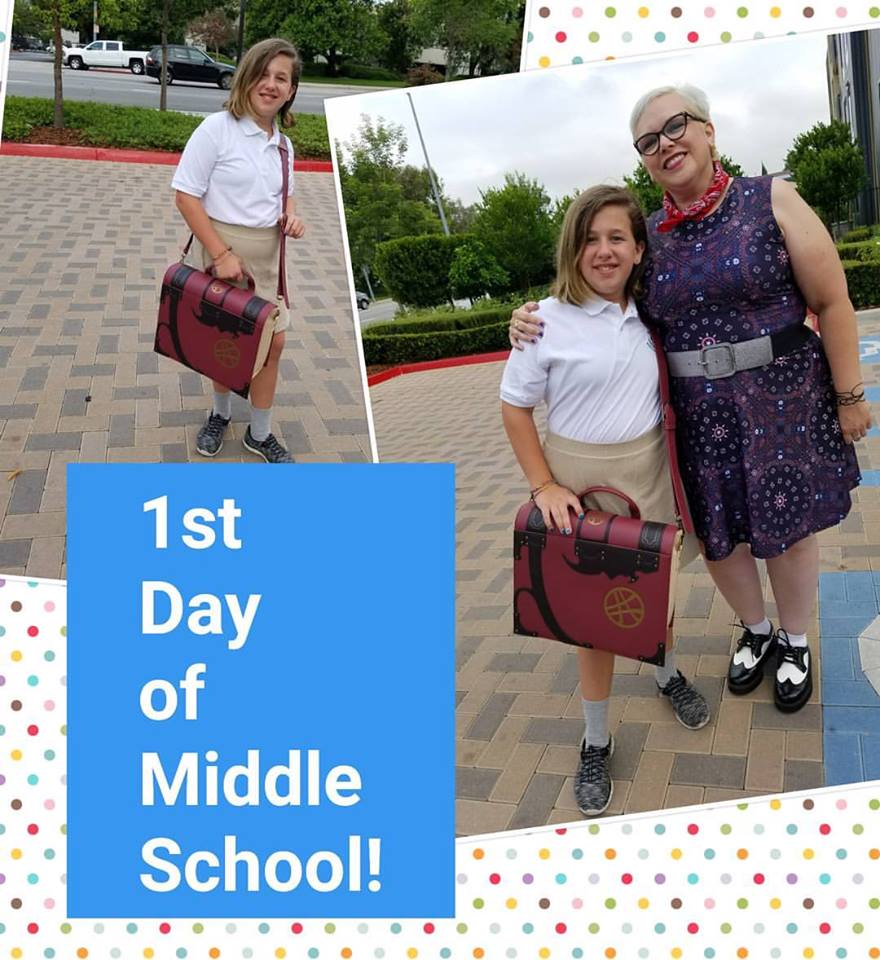 Recently, I realized as a geek parent, who is proud to be a geek, that raising a geeky kid has some challenges as she gets older.

As the kiddo approaches teenager status, she’s started to struggle with, “what the other kids are doing” more and more.  This was expected, but nonetheless, I was a bit unprepared for this new phase of her life when it actually happened.

It all started this past month while she was packing for her first trip to sleepover camp.  She took charge and got the list and began to pack, but as she did, I noticed that she was concerned about her sheets and her comforter.  At our house, they are Marvel, naturally, but a bit more generic at her father’s apartment.  The ones at her dad’s won a trip to camp.  Then her pajamas, and her t-shirts faced new scrutiny.  “What if I wear a Spiderman shirt to camp and none of the other girls are wearing Marvel shirts?!”

You may think, “Whatever!  Wear what you want!”  This would have been her answer a couple of summers ago, but not now.  This may seem to be such a non-issue, but when you are 11, it is everything.

So, as a parent that trumpets body positivity and confidence on a blog no-less, and someone who has always done her own thing, how do you reconcile this issue?  How do you be a good parent, but teach your kid at the same time to be confident and themselves?

It’s a tricky thing.  My best answer, and what I will be doing, is to be a support system at all times.  If they want to wear what everyone else is wearing, then fine.  A tween and a teen’s comfort in social situations is crucial right now.  Allow them to be comfortable.  Their individuality will show its face again, don’t you worry.  Once they get settled into the new school and meet new friends, then that special style will shine through.

So, I didn’t freak when she wanted to leave the Marvel at home for camp.  Who cares?  It’s fine.  She relaxed and had a great time at camp instead of constantly worrying about being made fun of because she likes “nerdy things” or “boy things”.  She has the ability to stand up for herself and express herself, but sometimes it is just easier to be comfy.  And comfy is OK.  As a parent, make sure they know that.  Don’t be judgmental.  They get enough of that at school, at camp, at swim team, etc.

I know from talking to other parents, that the kiddo it looked up to by many a kid for her style and her confidence.  That will bounce right back in time.  Especially if you are that safety net for her.  You are support.  When she decides to take a chance and wear something unique and different; you are there to support her and encourage that courageous move.  On the other end of it, be there and let her know that it is OK to be safe and comfortable amongst her peers.

Anyway, that’s my two cents.  What do my fellow ‘rents think?  Sound off in the comments!

Next time, more fashions and a fun unboxing of a Marvel Legends product!