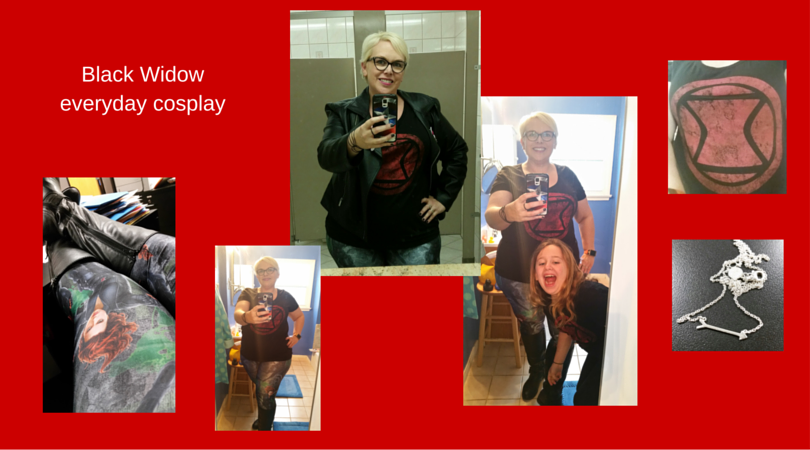 For our seventh Outfit of the Day, we went with one of our favorite characters in the Marvel Universe, Black Widow.  This outfit has a real everyday cosplay or bounding feel to it.  This time of year, wearing a great pair of leggings with tall boots is an easy and comfortable choice.  We were lucky enough to find a great Black Widow women’s t-shirt to go with these fantastic leggings.

The leggings are from Living Dead Clothing in an XL.  I am a size 18/20 for reference.  The fit is great.  Not too see-through, rise is natural and not low-cut, so they stay in place all day.  They are also fairly long for taller gals.  I’ve had these for almost a year, and they still look like new.

The t-shirt is from Her Universe.  I’m wearing a 3X.  This shirt comes in both standard and plus sizing.  The length is good for wearing with leggings in that it isn’t too terribly short.  The fit is pretty true-to-size, but I tend to go a size up in Her Universe to leave a little extra room.  The neckline is very flattering and very much a ladies’ t-shirt and not a man’s shirt or unisex shirt that just happens to have something girly on it. 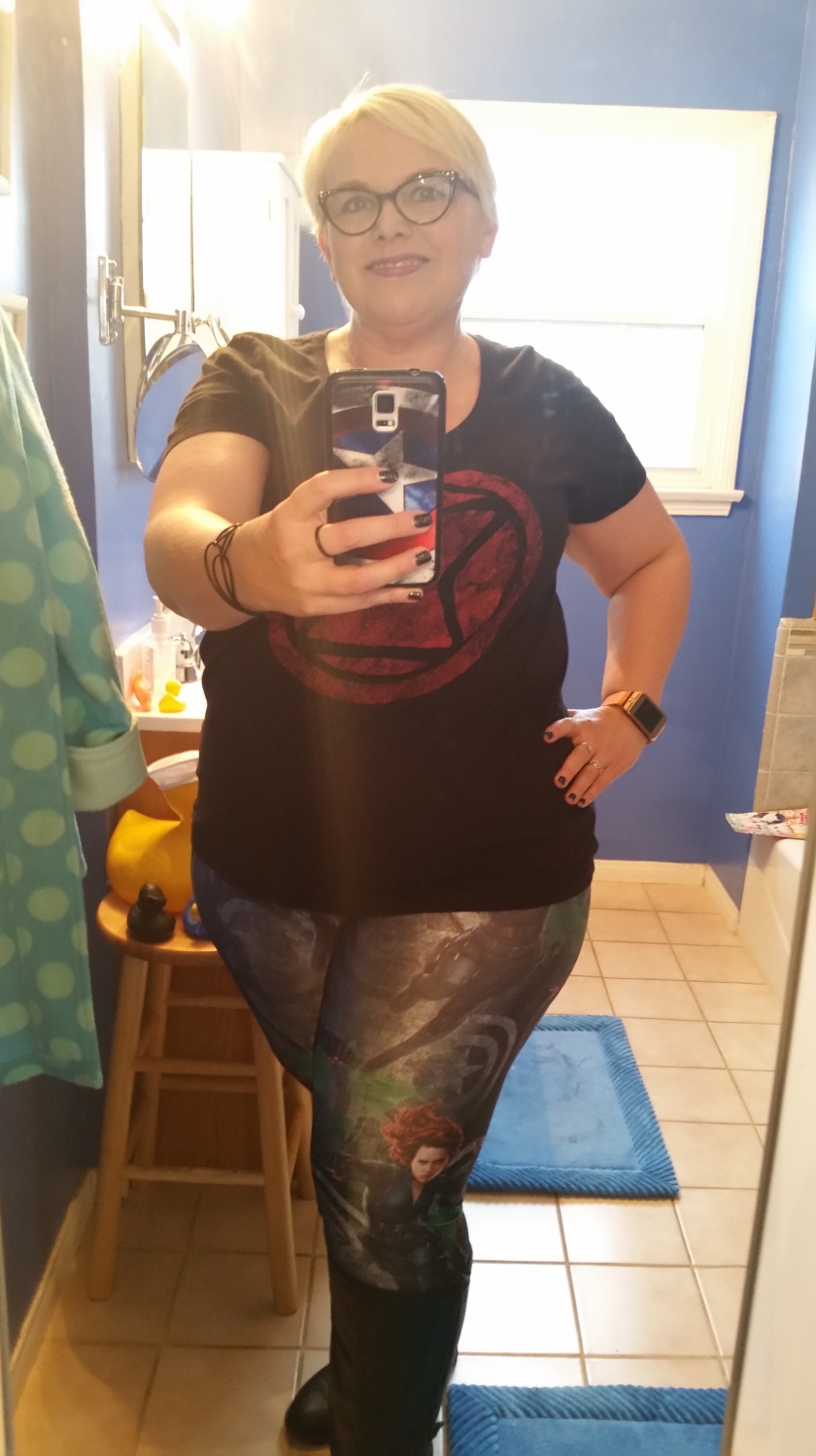 Here’s an up close look at both the leggings and t-shirt. 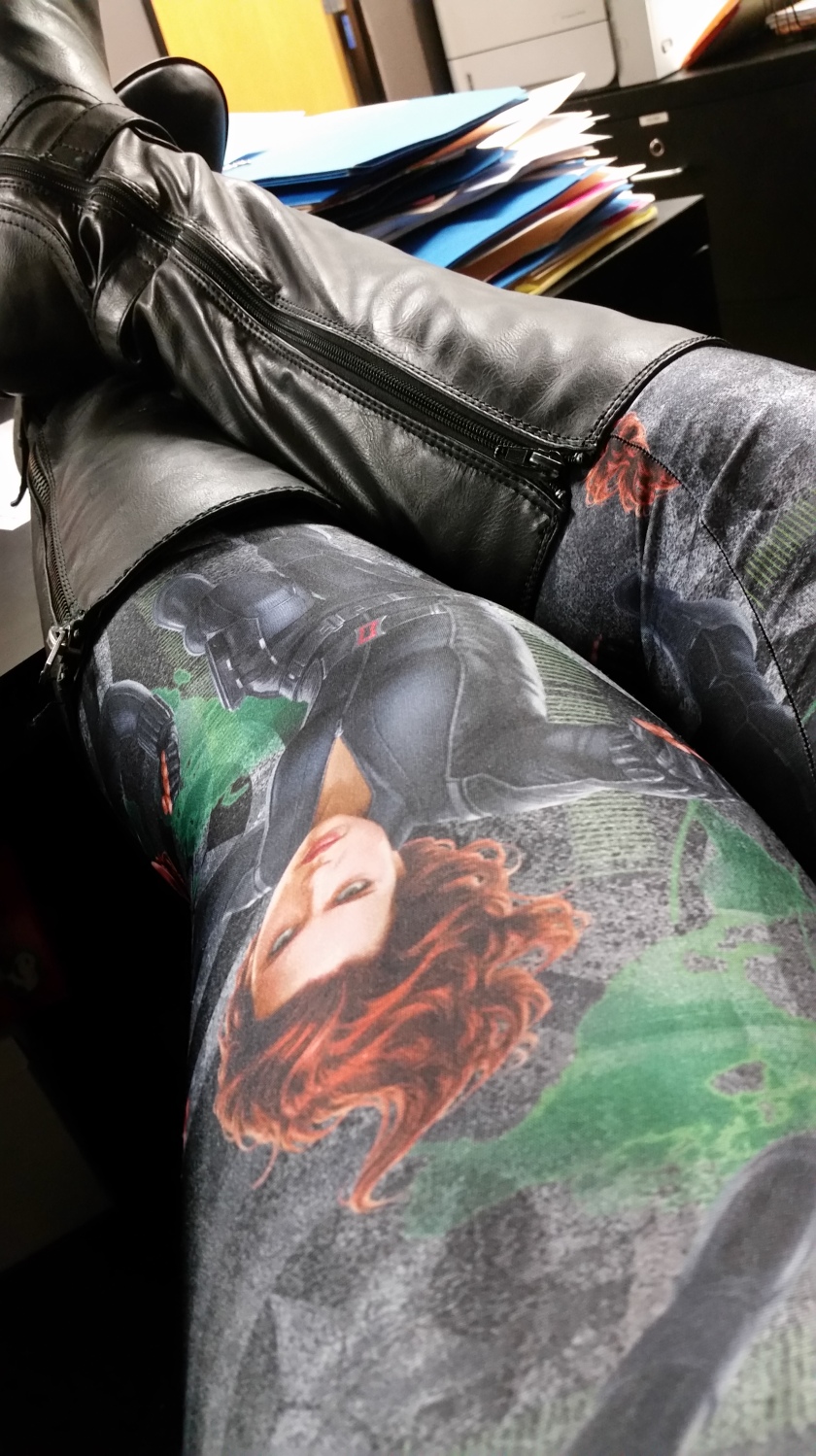 For accessories, I paired it with my black leather jacket and Widow necklace.  Ms. Romanoff does love her some leather jackets after all! 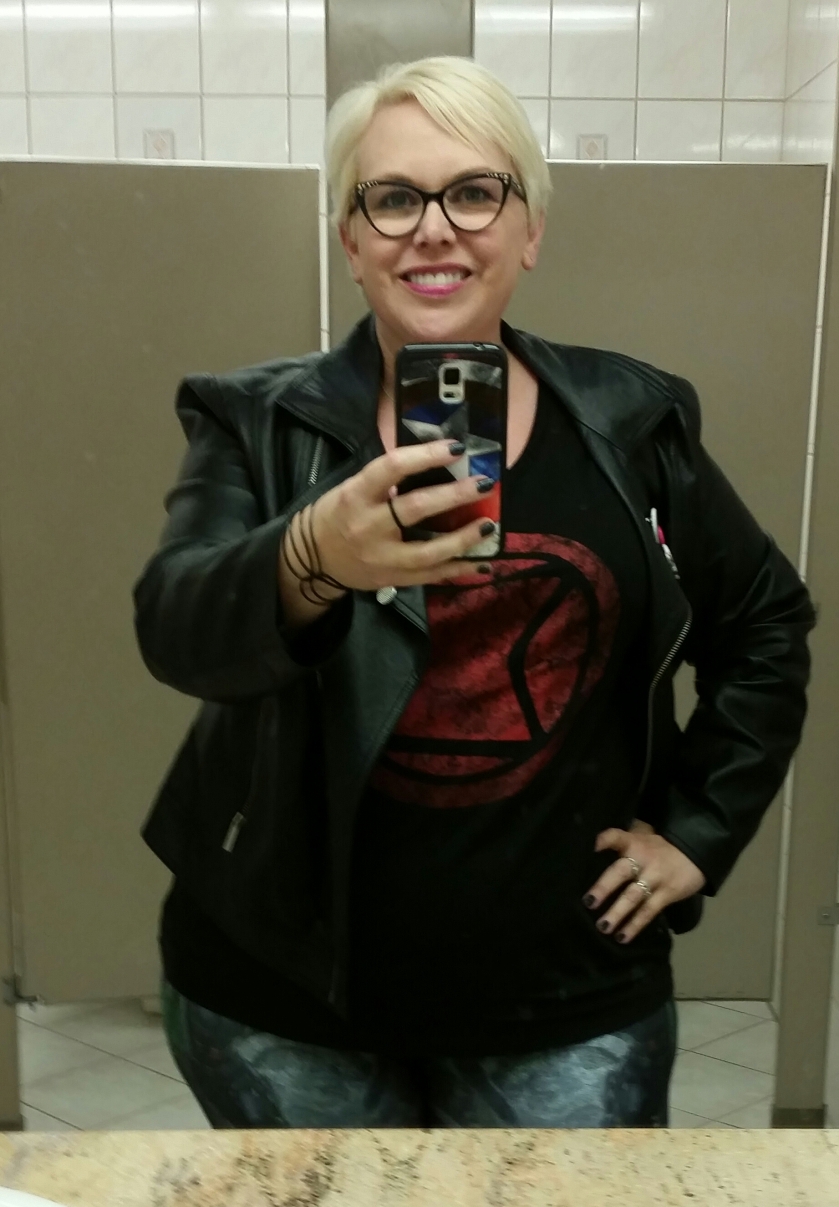 Shopping guides for all below.  Happy Shopping! OK, so the first Con of the year is done!  Scout and I had a fantastic time!  To recap:

I grew up in Arkansas and a few of my oldest and dearest friends still live in Arkansas and in the South.  We went to SDCC a few years ago together and had a blast.  As the years went by, we kept trying to synch up and go to another Con together without success.  Life happens.  So, when I noticed that they got together for the Dallas Comic Cons (they have two a year), and Scout’s birthday trip was coming up, we pulled the trigger on making the trip to Dallas.

The Con we attended is the smaller of the two.  I expected something LBCC sized, but got more Comikaze sized instead.  Nice surprise.

The panel situation there was a bit different.  There is way more emphasis on meet and greet opportunities with celebrities.  These experiences are a separate ticket, but you are guaranteed to meet the celebrity, take a picture with them and get an autograph.  I think that is definitely worth the money.

The main ballroom had Q and A sessions with various celebrities rather than the cast of a movie or television show.  I was unable to attend these sessions due to time, but my friends saw John Barrowman and said he was fantastic!

This Con is a big cosplay con.  The cosplay competition was wonderful.  So many talented cosplayers in that part of our country.  I did not envy the judges having to award the best in show to just one cosplay.

The show floor was also a bit different.  There wasn’t a dedicated Artists’ Alley, instead the artists and small publishers were mixed in with all the other booths.  This does have its advantages.  The floor was relatively small, so the artists had guaranteed foot traffic. 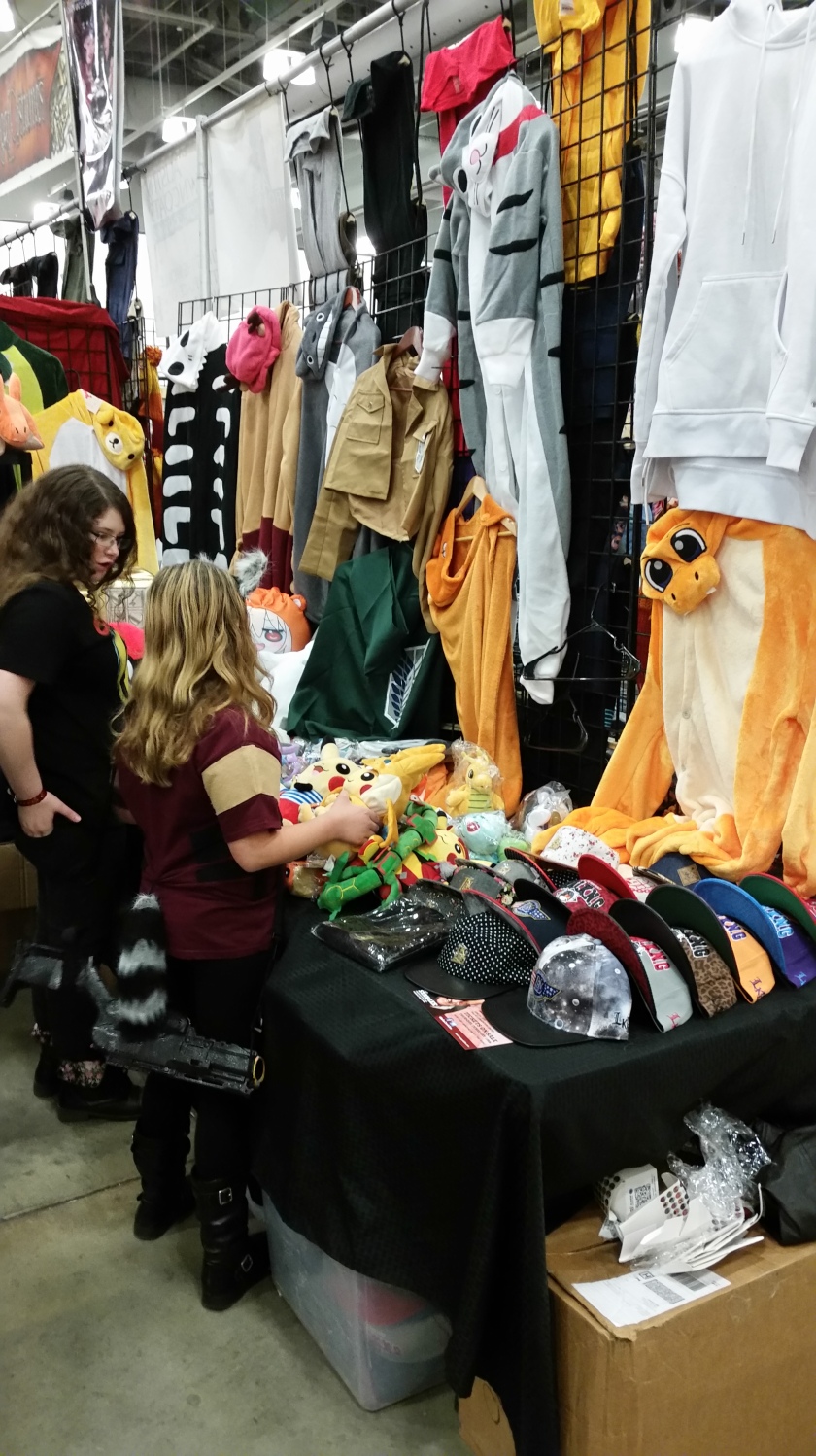 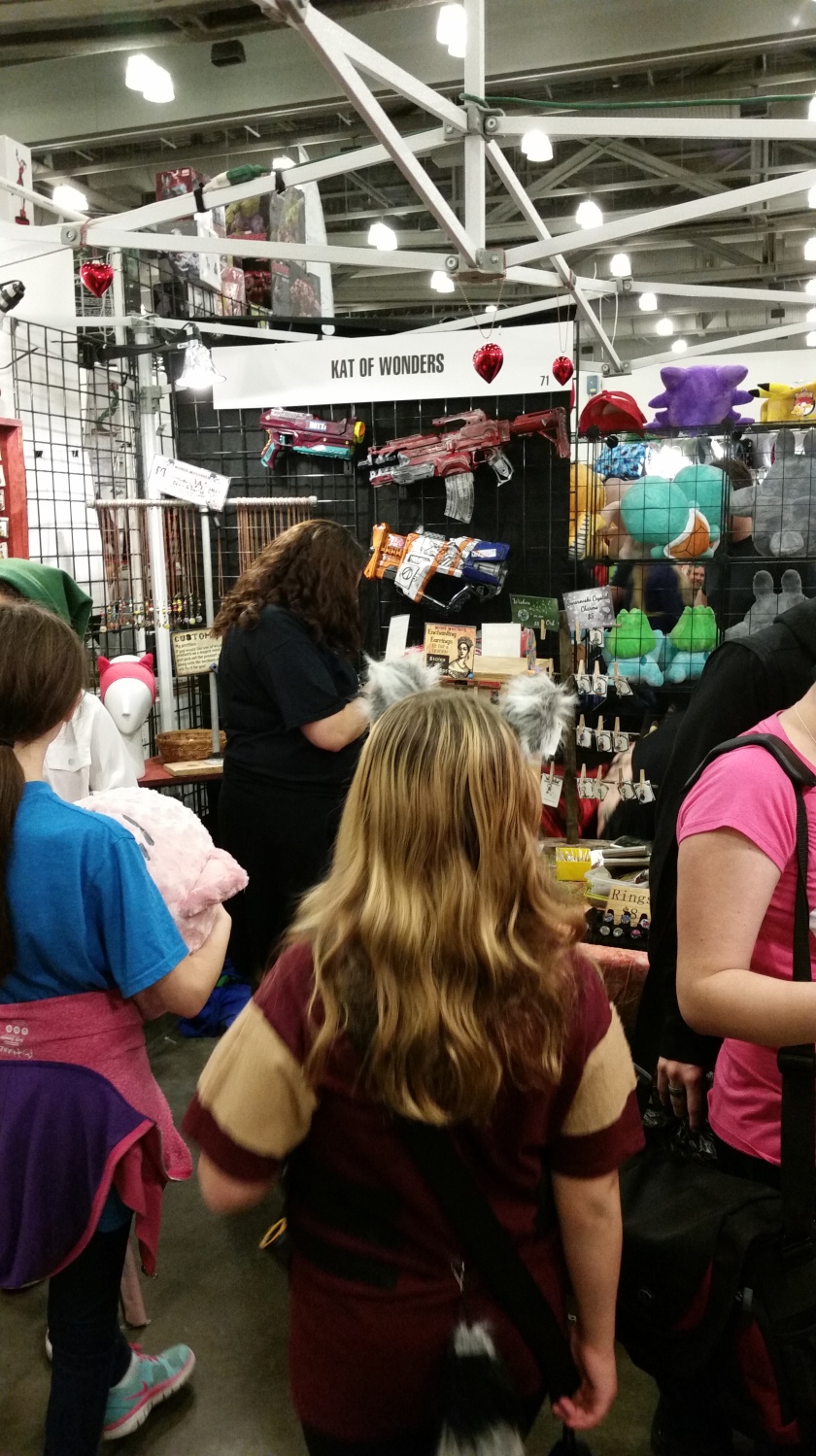 Scout and I really loved the vendors that Dallas had to offer.  Lot’s of fashion, jewelry and accessories.  We took full advantage! 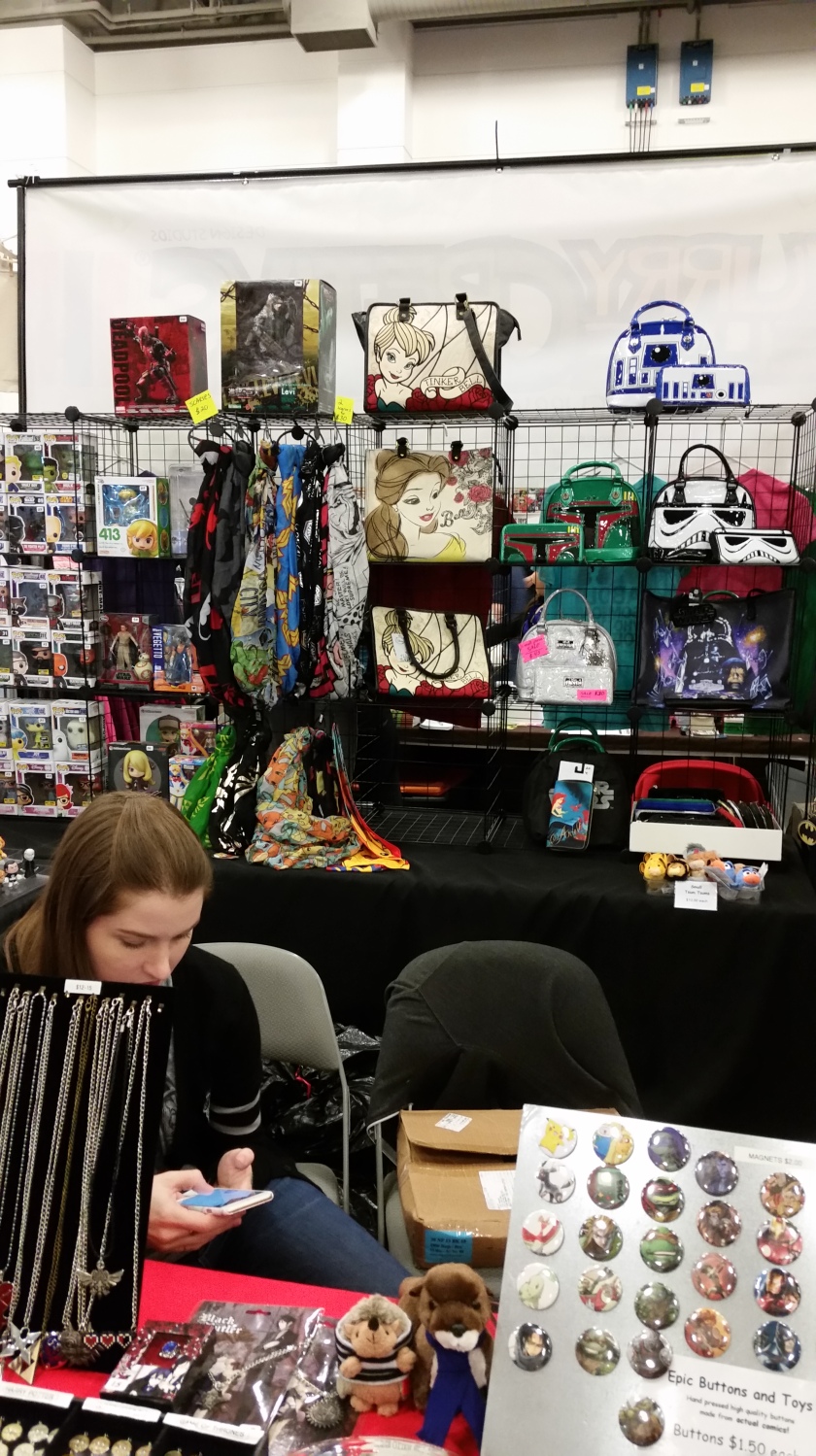 We also had an endless supply of Funko Pops to choose from at several booths. 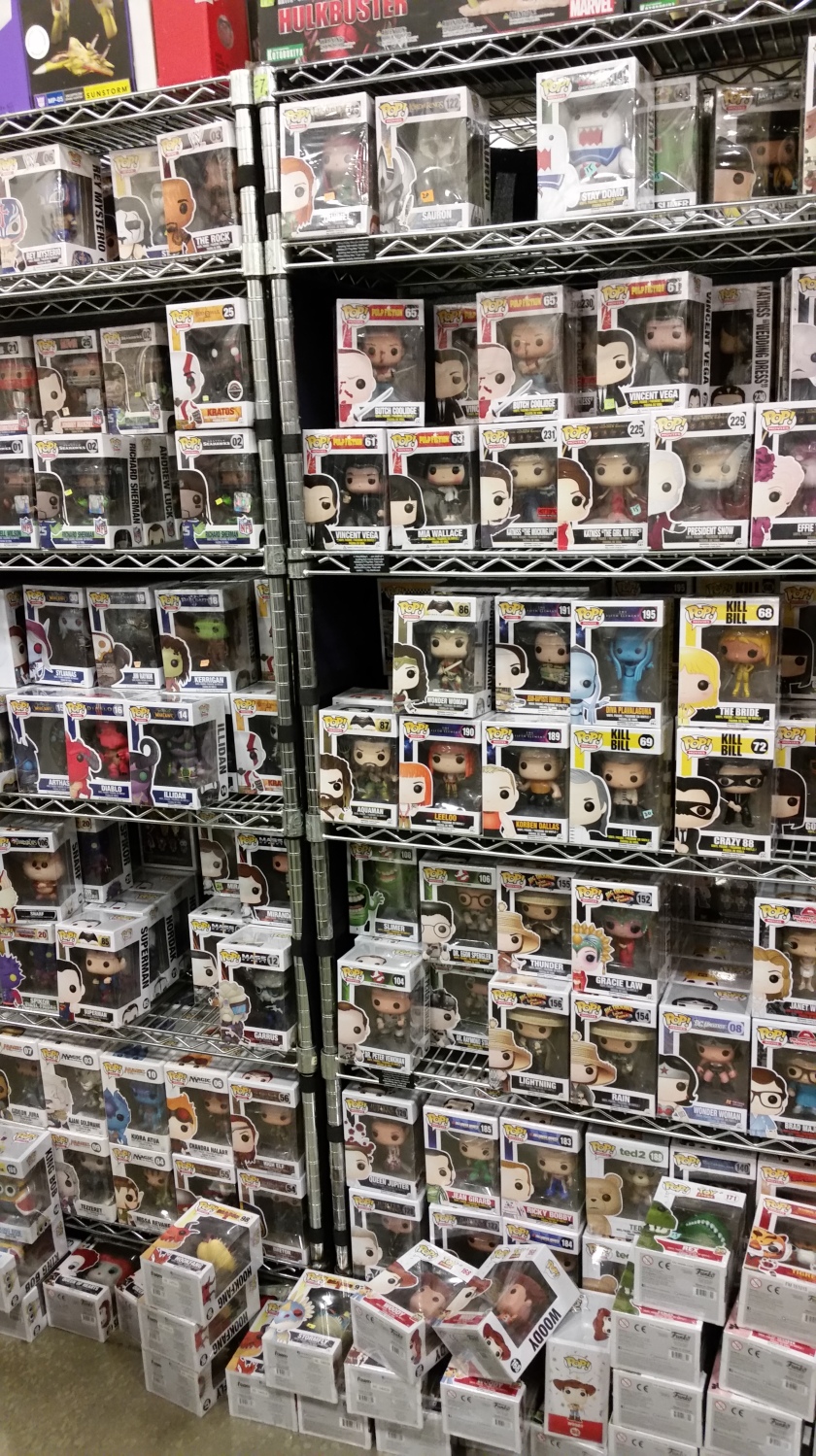 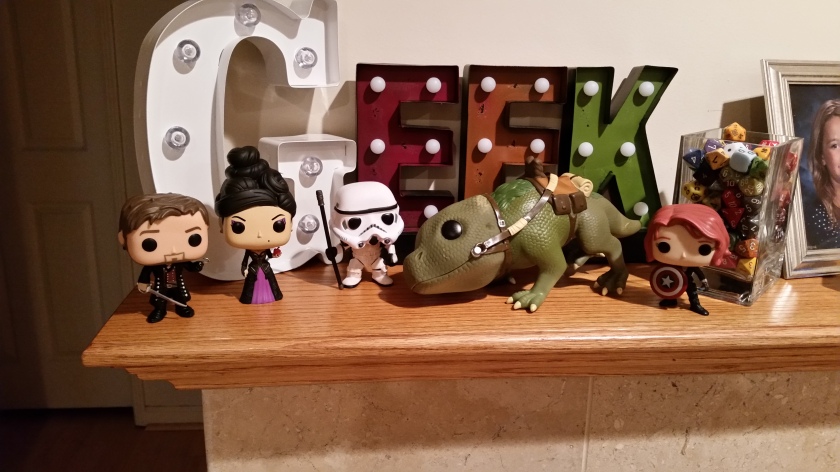 Part Two of our experience, I will go into more detail on the cosplay experience! 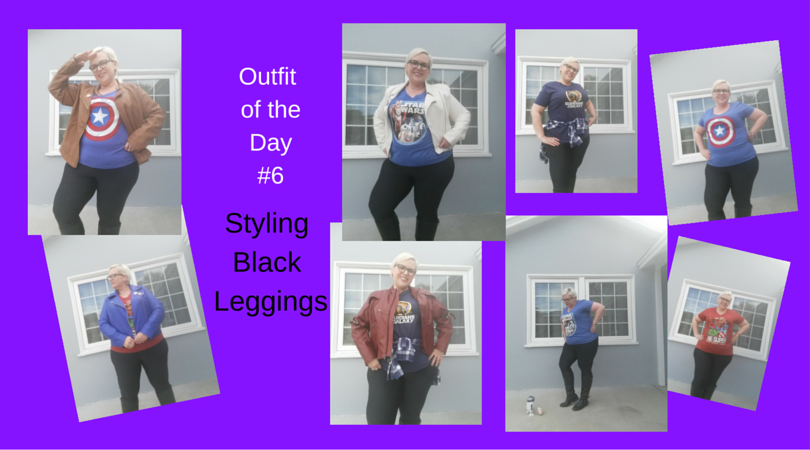 The other day, I needed to head out to do a couple of quick errands, so I grabbed my basic black leggings and threw on a nerdy shirt and ran out the door.  Inspiration struck.  I decided to do a piece on how to style the basic black legging and freshen up your nerdy t-shirt collection at the same time.  Here are a couple ideas for you: 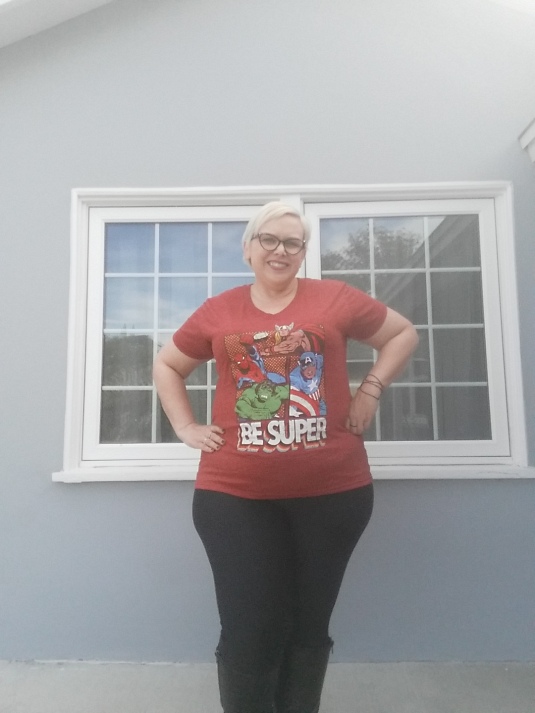 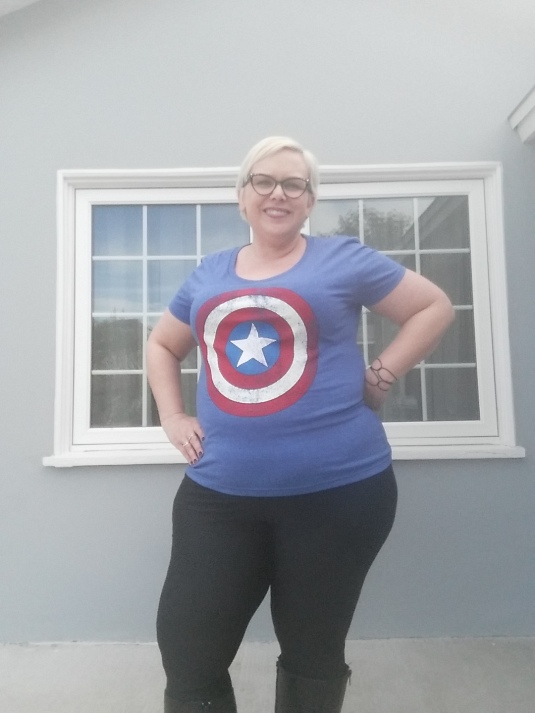 As you can see, I just paired the leggings with a favorite t-shirt and tall boots.  You can mix this up by wearing a boot in a different color that compliments the colors in the t-shirt as well.  Another thing you can do, is to wear a leather jacket to complete the look and give it another pop of color, like these pictures show: 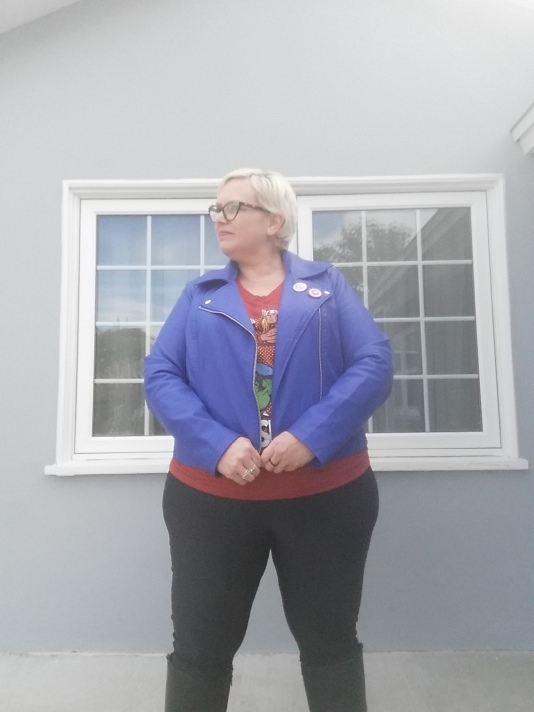 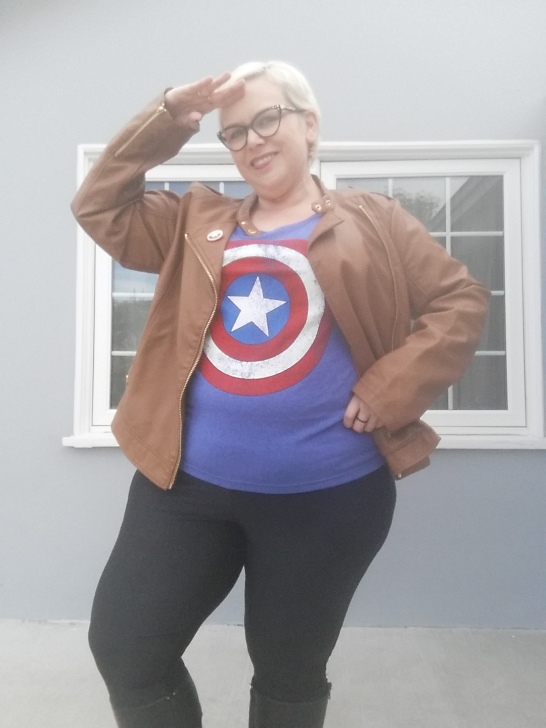 You’ll notice that all these t-shirts are regular ‘ol nerdy t-shirts.  They aren’t particularly long or tunic-like.  That is because I feel that leggings are totally pants and should be worn that way.  Now don’t get me wrong, I do love the slimness of the legging paired with something more voluminous on top.  Creates a nice balance, but I want to show you that you can be body-confident.  Wear leggings this way too. I think you’ll be surprised at how elongating this look can be.  Show ’em what you’ve got, I say!

Here are some more looks to give you ideas.  This is a great way to freshen up your look without having to go shopping.  You have at least one of each of these types of pieces in your closet right now.  Take advantage of the tall boot weather and send us some pics of what you come up with!  Scout and I want to see!  Shopping guides are below. 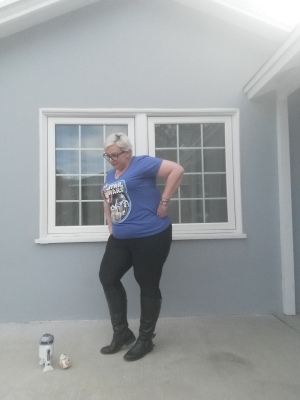 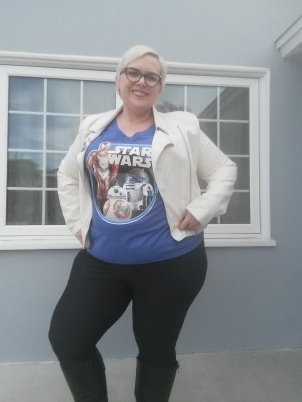 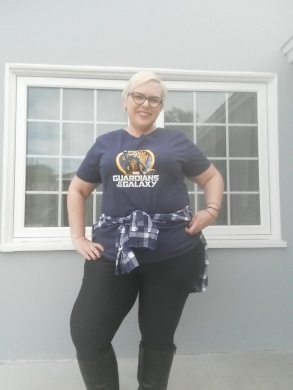 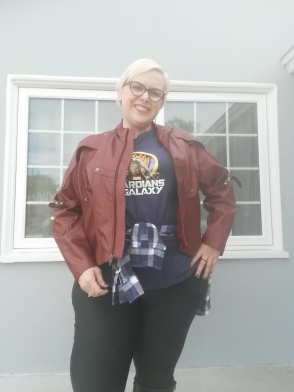 Blue and brown leather jackets and boots from Lane Bryant

Guardians of the Galaxy t-shirt, from cafepress.com

Star Lord replica jacket no longer available, but here is a link to a company that makes them and they do great work.  black-leatherjacket.com 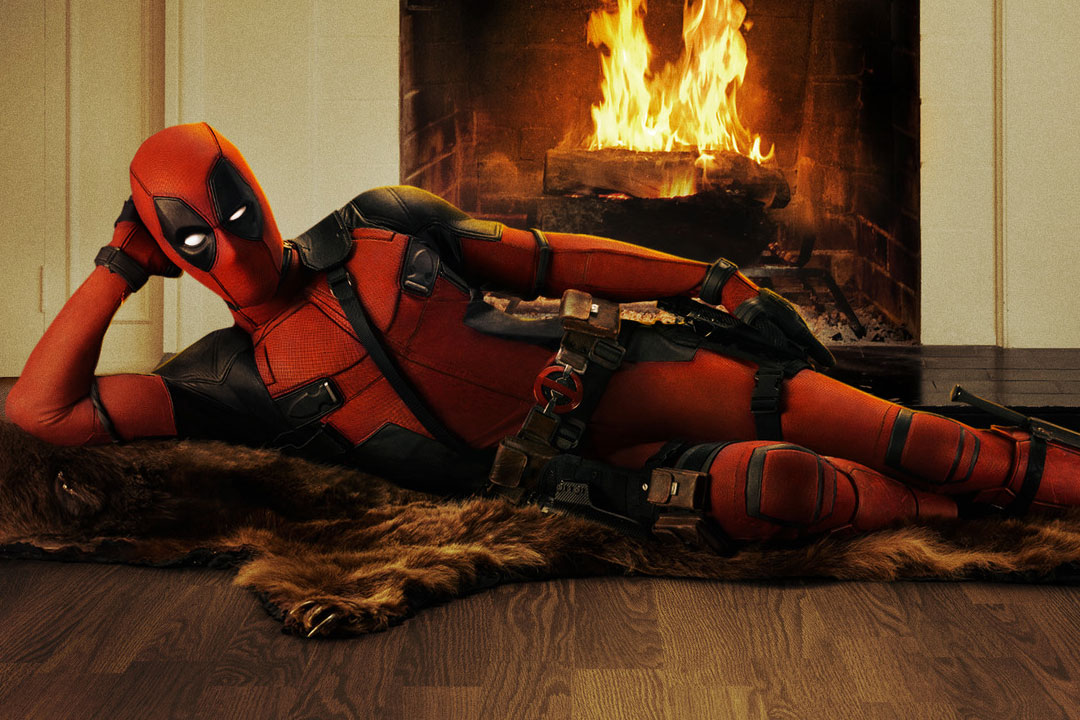 OK, so “Deadpool” is finally coming out in theatres today.  About darn time if you ask me.  I think the film looks fantastic!  To celebrate, I thought I would gather some cool Deadpool clothing and accessories here for all of you.

First find is some wicked cool workout wear from Castle Corsetry’s new collection that is Deadpool inspired.  The leggings have a built in cell phone pocket, which is the greatest thing ever, honestly.

I found this cute t-shirt on Amazon.

I also found some cute leggings on Superherostuff.com.

Enjoy the movie and happy shopping! 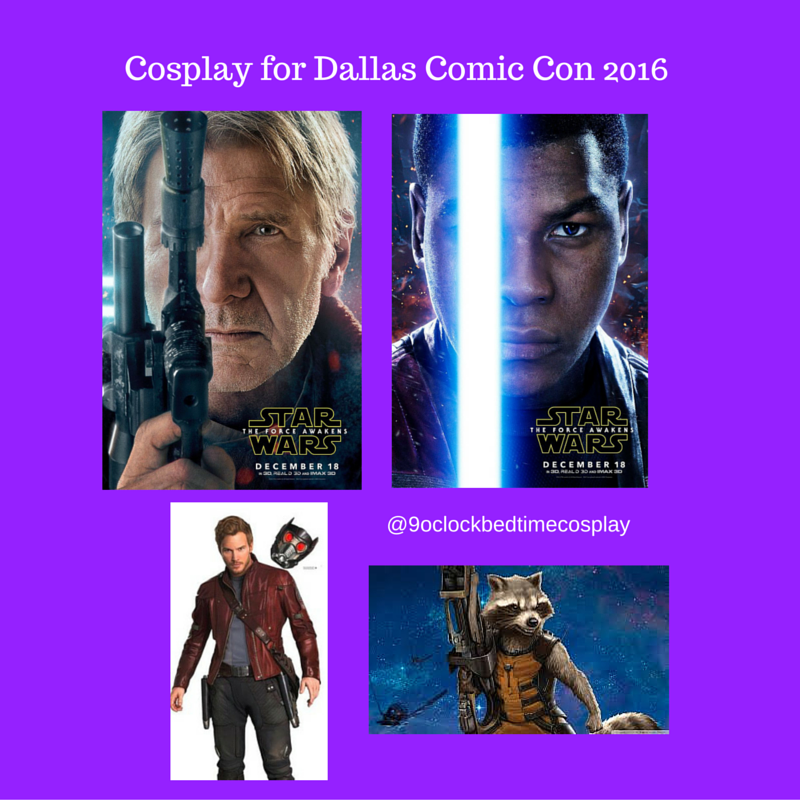 Here is 9 O’Clock Bedtime Cosplay’s planned cosplay for Dallas Comic Con 2016, taking place on February 13 and 14!  If you plan to be there, please track us down and take a picture with us!

Hope to see you there! 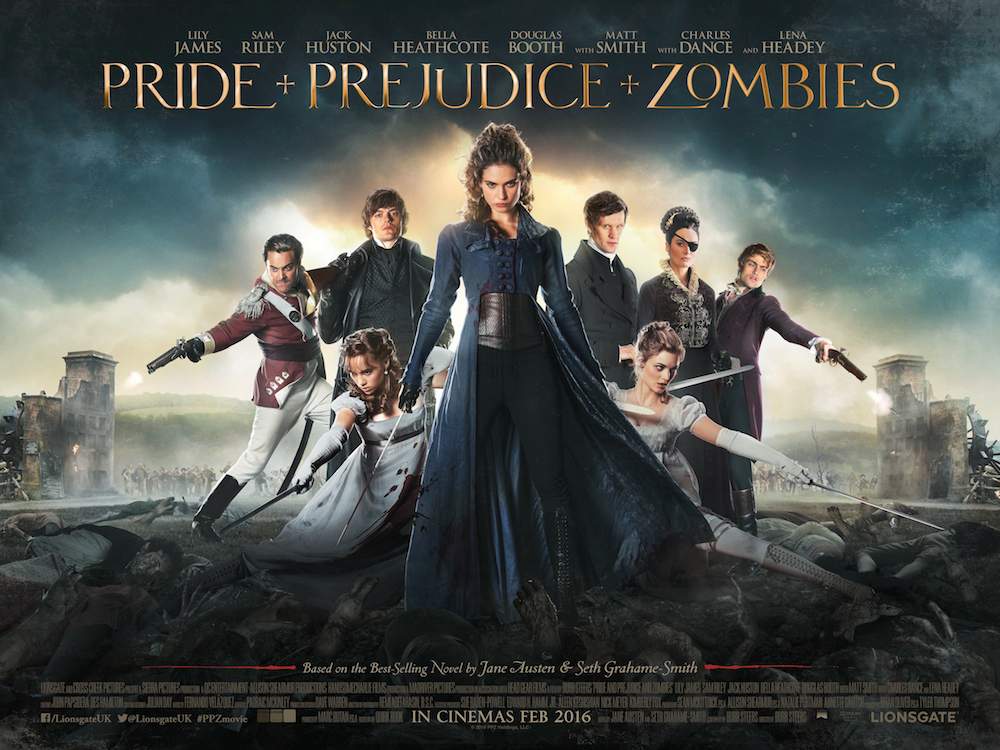 The new movie, “Pride and Prejudice and Zombies” is set to open today in theatres.  To celebrate, Hot Topic has introduced a special collection of clothing and lingerie inspired by the film.

Take a look at the collection and order it here:

Pride and Prejudice and Zombies Collection

I’m in love with several of these pieces, but I’m especially tempted by this dress:

Price points are reasonable and the sizing is fantastic!  Most items go all the way up to 3X!  I love how Hot Topic is including plus sizes in most of their clothing these days.

See you at the movies and happy shopping!