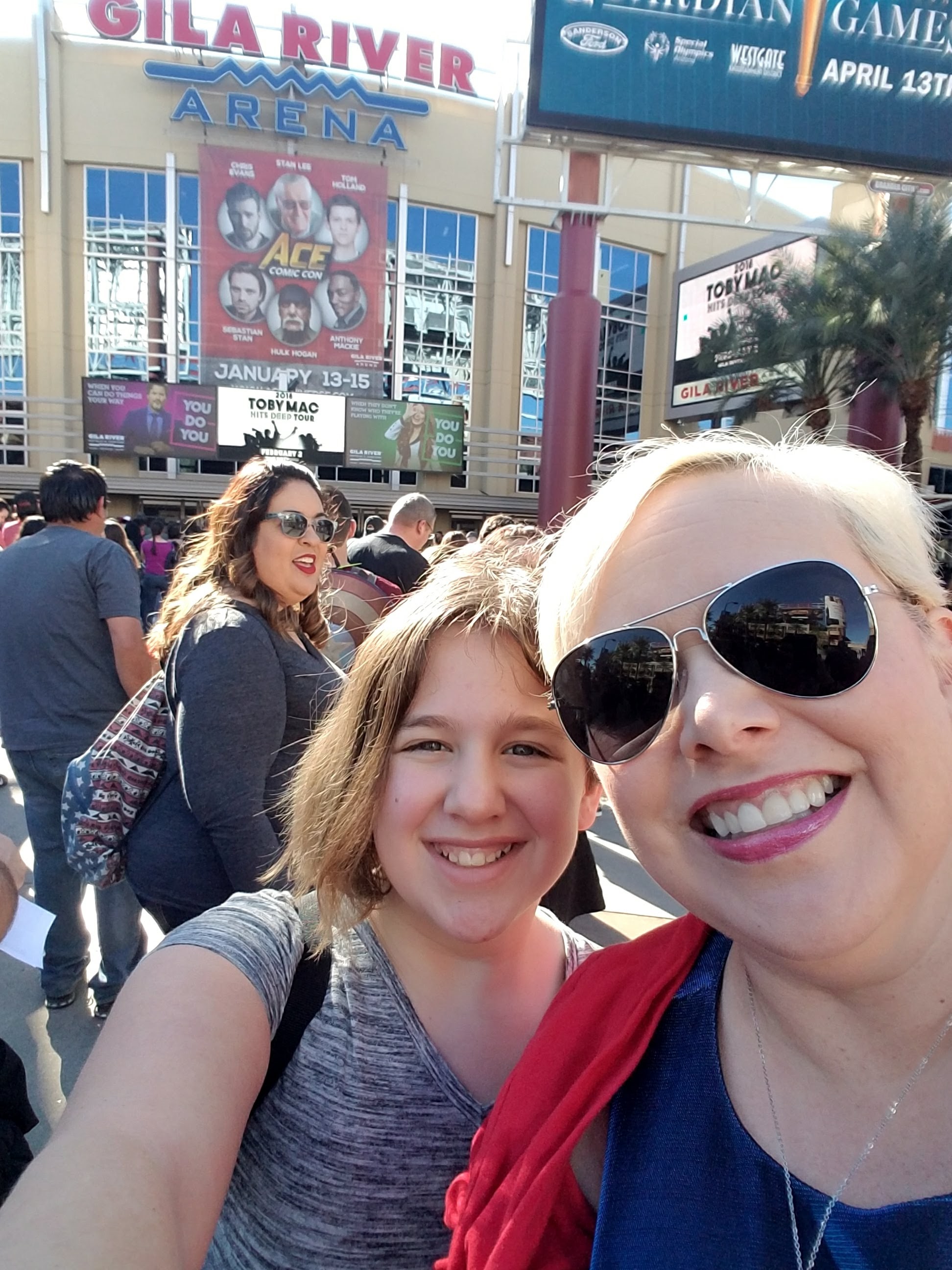 Last month we had the opportunity of a lifetime at ACE Comic Con in Phoenix.  We got to meet and get a photo op with several Marvel heroes, Chris Evans (aka Cap), Anthony Mackie (aka Falcon), Tom Holland (aka Spidey) and Jacob Batalon (aka Ned aka The Guy in the Chair).

In short, we had an amazing time!  Photo ops are a new thing for us, and it is a very unusual experience.  We learned a couple things this go around that we will put to good use next time.  Here’s a run-down in case you are thinking about doing a photo op:

Other than the photo ops, there were autograph ops, which we did not go for this time around.  Maybe next time.  For those, also expect conflicting information on what the star will and will not sign.

This con was a little different in that it is held in a stadium.  Half of the floor is the staging area for photo ops and a vendor area and the other half is the main stage for the panels.  I did really like the set-up for the panels.  The panels were a lot of fun and most of the attendees wanted to go to the panels.  So, the ability to see them without sleeping on a sidewalk was a great thing.  It also brought everyone together.  We really enjoyed that shared experience.

There were other vendors sprinkled outside the main floor in the concession areas.  There was a pretty big artist alley with some great artists in attendance.  The vendors, on the other hand, were very disappointing.  No fashion to speak of.  Not even a t-shirt tower.  The vendors were predominately from the Phoenix area, which is to be expected.  They were local comic shops, and I have to say, I felt first-hand that unwelcome feeling because I’m female from almost all of them.  I’ve been very fortunate in that every comic shop I’ve gone into until now has been very welcoming to me.  I’ve never encountered this, “Get out of our clubhouse!” feeling before.  Because we were in a setting with literally thousands of other people, I didn’t ever feel unsafe or anything, but I can only imagine what this would feel like if you walked into a small comic shop alone.  It is pretty creepy.

That being said, the staff at the Gila River Arena were the best, the best!  So helpful and so friendly.  The local PD did weapons check and were great!  The staff opened extra gates to get us all out of the sun and into the shade while we waiting for the gates to open.  They had a DJ there to entertain us while we waited.  They opened the gates almost on time (only 10 minutes late, no biggie).  We felt welcome there, unlike other cons where the staff makes you feel like a criminal and barks orders at you (I’m looking at you, SDCC and LA Convention Center!)

I was also surprised to see that there was almost no cosplay at this con.  I chose to not cosplay for my photos, but Scout did and Anthony Mackie was super nice about her Falcon cosplay, which made her year!  I think most people were like me and decided to dress up and not cosplay for their photos.  I saw some great bounding and got some ideas for the future.

My favorite part of cons, no matter where or when, is running into friends:

Would I go back to this con next year?  Maybe, depending on the photo op and autograph opportunities.  I know better how to prep for it and what to expect.

So, now we wait til the next con, WonderCon Anaheim in March!